Chess and the Russian Rifle.

Chess and the Russian Rifle.


I do not actually have a copy of this book. I googled it and nicked the image.

I am using the cover because it is the only way for me to spell it correctly and I want
to do a blog about a variation in this opening. ( I do not even know if it is in the book.)


White now plays 6.Bg5. Instead of being named after that Russian Rifle, the opening
is sometimes called the De Labourdonnais Variation. 6.Bg4 It is not given this book...

But I forgive the authors of this one because tucked away in the notes on page 31 is this:

What usually happens now is I get sidetracked and go off on a tangent chasing
games from here with the same three piece mating pattern as the above game.

It’s how these blogs materialise. I sit down without any clue what I am going to write
about and go where the wind takes me. (That is also how I play my games of Chess.)

Here are the final positions from four RHP games with the same mate in all four corners. 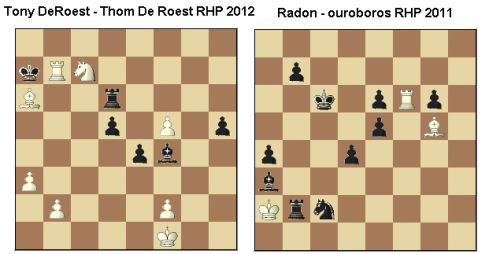 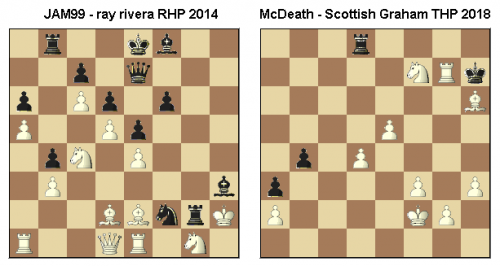 The challenge now is to get the blog back on course and talk about the Russian Rifle Book.

But that just it. I cannot think of any link back to the book....but I will, trust me.

The task is to use one set of chessmen (no pawns) to attack every square on the board.
A piece on a square is not classed as attacking that square. You might think this is easy.
It’s not, so far it has proved impossible, though please be my guest in trying to solve it.

You can only use. A King, a Queen, two Rooks, two Bishops and two Knights.

The best anyone has ever come up with is attacking 63 squares (here one could argue
that the square not attacked is for the opposite coloured King to make the position legal.)

But it can be done if the two Bishops operate on the same colour of square.


The solution with every square (including the square each piece is on) being attacked.
It can only be done if the two Bishops, as in the above diagram, are of the same colour.

This study by Rossolimo (1950) has an instructive point.


White to play and win.

You should see the winning plan right away, just one cute move to find on move 7.

A couple of Red Hot Pawn games showing the main ideas in action.

Locked in and ideas for the blog locked out. I found myself skimming this June 1989 BCM

Inside they are looking at a game in the French Defence. The Alekhine Chatard variation.

They are hinting that the ‘forced’ win is not forced but it is a wonderful line.

Just had a thought about the Russian Rifle book.

What would it have been called if they analysed this variation in the 1800’s.

Or looked at it in the times of Chaucer.

When David slew Goliath it would have bee......

(that is enough of the book title jokes greenpawn.....Russ)