The Mysterious Art of Zugzwang.

The Mysterious Art of Zugzwang.

The first Super GM O.T.B. tournament to be held for a long time recently finished.
It was held in Norway. Carlsen won it and the final score table looks like this.

(it was Double Round Robin - they played each other twice)

Confused? I’ll explain it as you may see more tables like this as the format
seems to be quite popular and is bound is to used again in future events.

You get 3pts. for a win. ½ for a draw and right after the draw the players have
to play an Armageddon Game where here (it may vary at other places ) White
has 10 minutes - Black 7 minutes plus the draw odds. (a draw is a Black win.)

If you win the Armageddon Game you get 1 pt and the loser gets ½ point.

And just incase you do not know what any of these players look like,
here is the picture of them from (I kid you not) the official website. 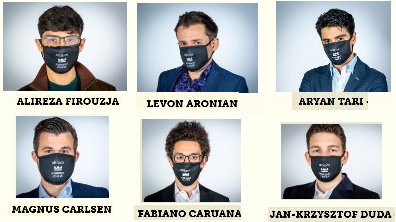 Typically I did the cartoon, rather good I thought, and then could
not find any immediate examples of Zugzwang on Red Hot Pawn.

I’ll get some in the future in the meanwhile...

(Next week Knight and Stable Mates)

Some good and not so good play here. Players relaxing in won positions
and desperate players setting Stalemate traps. All examples are from 2020


Black wins by marching the King across to the c-pawn.
Instead Black played 56...h2 57.Rxc3+ Rxc3 stalemate.

This next one could have been labelled under ‘Pause Before Promoting’ category.


Following on from that we see this wonderful piece of tricky dicky play from both players.

If you only ever pick one thing from all these blogs please look at my note after
White’s move 2.Kg1. Sometimes a useless looking check pays dividends and
I am afraid for the 100th time (surely more than that...Russ) ‘Check All Checks!’


This next one is a chess writers dream. The position, note and the game follow perfectly.

Was not going to use this but the final position struck a chord.
Something about it nagged my rapidly decaying grey brain cells.
The 'Most Instrucitve Games' By Chernev popped into my skull.

This is the copy I have had since the late 60’s. Still read it now and again.


Can you see the similarity. Somehow I did (the wee brain still works sometimes.)

And the Chernev note about played killing themselves...or even worse.

Evans played 75 Rf3+ and went onto win. But could I be so lucky as
to find an RHP game where a player has actually walked into this.


And finally. I mentioned the mate that Black threatened in that last game.


I found an old RHP game that ended with this pattern.