Rather than go into other details about events planned and ruined (Covid)
I thought here, on my blog thingy, I would just concentrate on the match
that secured the club it’s place in history. (though being the second oldest
chess club in the world that is still running, that too is quite noteworthy)

It is of course the correspondence match between Edinburgh and London 1824-28.
Five games were played and in typically me fashion I will concentrate on just one.
That one being the famous (or infamous, it all depends on which side of the border
you base you point of view on ) Game Two and the national controversy it caused.

The two cities agreed to play a match with the losers supplying a trophy. 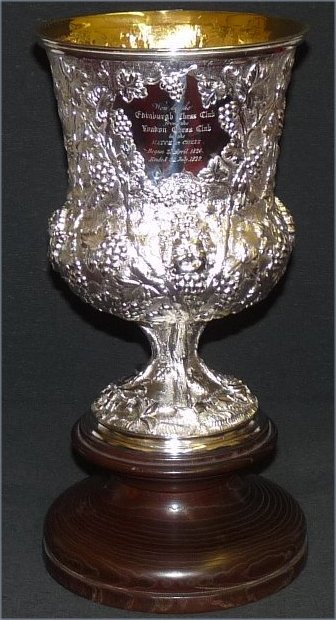 This is the trophy and it is now known as the Scots Gambit Cup.

London started Game Two on the 28th of April 1825 and resigned it on the 3rd Feb 1826.
John Cochrane, a Scot, who was living in London at that time as a practising lawyer
and member of the London club’s committee to handle the match suggested London
play, after the opening moves 1.e4 e5 2. Nf3 Nc6 the move 3. d4 and they agreed.


Cochrane had written a book containing analysis of this opening in 1822.
He called it the ‘Queens Pawn Two Game” with this introduction.

The Edinburgh Club, taken by surprise, were in difficulties as early as move 5.

I am going to digress for a bit. Edinburgh were so impressed with the play London got
from this opening they bought a copy of Cochrane book. studied it and played the
opening v London in Game five, they won Game five and in doing so won the match.

The Edinburgh club still has that copy of Cochrane’s book and Game five is a
truly remarkable game of bluff and counter bluff and this was not restricted to
moves on the chessboard. Off board a brilliant plan was put in place. Next Blog!

End of digression, let us return to Game Two. It’s move 26 with London to play.

This is the position London were aiming for. (Black to play. )

Edinburgh’s 25th move was 25...a7-a5 and it does appear that whoever looked
at the board and played the Rook sac had not included this move on their board.

Of course this is speculation on my part but it’s a very plausible explanation.

Edinburgh were puzzled by the Rook sac and wondering where the forced win they
expected to find lay hidden (there is not one) When suddenly another letter arrived!

London were requesting that their conditional moves starting with the Rook sacrifice
(27.Rxg5+) be ignored and the only move they want to play is the first move, 26.Qc5+
As you can see, London tried to get the letter back but the Post Master said ‘No.’

Edinburgh refused to allow London to recall their moves saying that conditional moves
were binding. ‘touch move...or in this case touch quill’ London reluctantly played on.

(That is not quite what happened, you are getting the condensed version. A storm erupted
in the press on both sides of the border. The match was now being billed nationally as
‘Scotland v England ‘ furious letters to editors were still being seen about in the 1850’s)

Let’s look at the part of the game where the controversy happened.

The reason why London refused the draw was because they always had a perpetual
but they also had winning chances. So keeping the perpetual in their back pocket they
tried to win the game. The only problem being is that the perpetual burned a hole in
their pocket and suddenly that hole ripped open and the perpetual dropped off the board.

(that again is speculation but almost certainly correct. The alternative is London were
so miffed at being forced to play their conditional move they carried on out of spite )

Now (finally) we look at the whole game.

Next blog Game 5 and a carefully laid trap both on and off the board.

The thread accompanying this blog is Thread 194255