The Chess Wedding of the Year

The Chess Wedding of the Year


It is celebration time here at Red Hot Pawn. The Duck has got married! 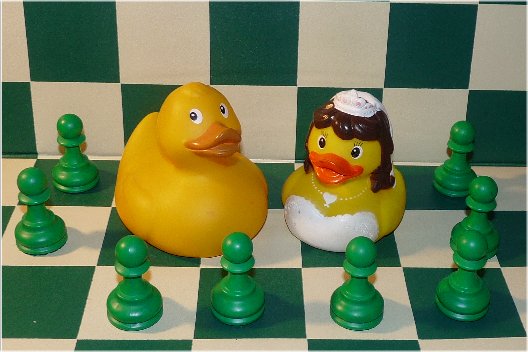 We wish The Duck and Mrs The Duck very many happy days together.

Now a problem from ‘The Scotsman Weekly’ 24th December 1927.
(apparently it was published in the ‘Chess Amateur’ many years earlier.)
I have made a few changes. originally Black was the devil, I’ve used...

You are White, Count Dracula is Black. You are playing for your soul.

Sounds pretty grim but there is a way out of it.


Solution at the bottom.

Too hard? OK here is a clue in form of an RHP game.

Occasionally, though not too often, I look back at old defeats
on here to remind myself that I’m not as smart as I think I am.
I paraphrase D.J. Morgan who ran Quotes and Queries in BCM.

This is one from 2012 I could resist going for the flashy-dashy win.

That was in the good old days when I use to write down every move in every
game and when it and if it got very tricky I’d pull it to bits on my chessboard.

I’ve got a few note books laying about full of RHP games. Think I’ll bury them
deep in a lead box some place and in 10,000 years an archaeologist from another
planet will come across them and claim they are ancient religious hieroglyphics.

I stopped doing that when I got into the Hardcore tournaments. Too much hassle.
You start by playing 40+ games at the same time. The first few days are always
the best as everyone is racing to get their games done and it is mistakes galore!

I managed to keep mine down to a minimum by simple developing and not doing
anything still a middle game popped up. Though sometimes I break that rule and
have an ‘idea.’ notching up a few losses in under 10 moves. This one is funny.

And this one I can explain. Typically I was racing through my games in the
opening phase of a Hardcore and below I had just played 7.Nd6 checkmate.


And a few minutes later in greenpawn34 - Farzad Farsee RHP 2018


I thought I’m getting it again! and played 8.Nxe4 Nxf5. 9. Nxf6 is checkmate!
But it’s not checkmate. Sitting there stunned I played 9.Nxf6+ and just resigned.
I recall going back to make sure my game v Farzad Farsee was checkmate.

There was some delightful chess hidden in the recent game
between Johann Hjartarson v Mads Andersen, Reykjavik 2022.


White played 1 e7 and the game was drawn. There are two good variations.

Next we see what was unique and instructive about this game.


The thread accompanying this blog is Thread 193024