I recently retired from work. The gang baked me and gave me a chess cake! 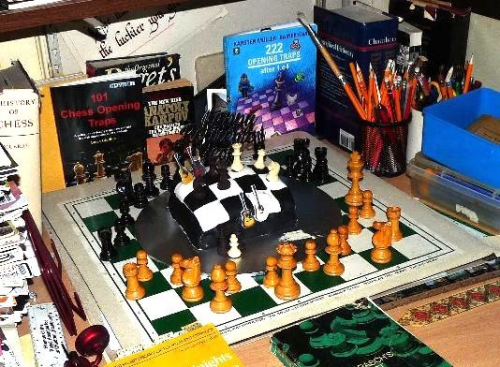 Not too clear, hang on I’ll put a yellow folder behind it. 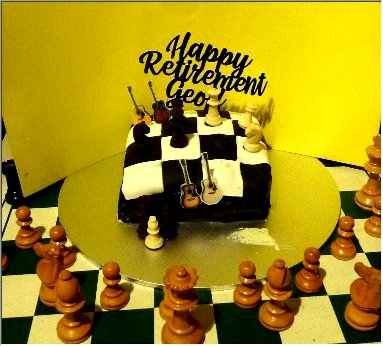 Jonathan Rowson in his book ‘Chess for Zebras’ talks about players being
f-pawn trigger happy when players with both colours cannot wait to throw
the f-pawn at their opponents very often realising right away it is a blunder.

Some drastic examples from RHP players where f7-f5 allowed a winning check.

White too suffers from this f-pawn fixation, in fact I found more examples with
White dropping a loose piece to a Queen check after an f-pawn push than Black.


Everything is ticking over nicely, suddenly White plays 11.f4 Qd4+ and then Qxc4.
Dozens (nay 100’s) of White RHP players have lost a loose Bishop on c4 this way.

Here you have an advantage in OTB chess, you can actually see the move on the board
before you play it. After your f-pawn push, make sure any coming check is not a winner.


The last one is good. It was this game that kicked off the search for more


The game went 39.b8=Q Rh2 checkmate but it could have been saved.

I’m still entering the Aitken games from his 45 score books, (I’m on book 9!) so a
couple of interesting moments to share from the 400+ games I’ve already entered.

We mentioned trigger happy f-pawns. Look at this case of double f-pawn blindness.


Black played 13...f5 and White cannot play Qxc6 because Bd5 would trap the Queen.
Aitken is usually good at these tricks. But here both players do not look deep enough.

Another Aitken game is in!. I’ve played over enough of this lad’s games, maybe
more than anyone else. Anyone can tell from his games he was a good player
But like us all he did he did slip up and here he even gives himself a double ??

From book 7. The critical position is actually the first position in:

When we blunder it is expected, Aitken blunders and it makes the books.