I bought a bag of small plastic babies for 20p and did this (it took me ages.)

A term given to Kings that are getting hounded all over the board often picking up
material on the way with Rooks, Queens, Knights and Bishops shooting at the them.

This next game is not really a good example of a Steel King, its more of a King Walk,
but as I did that drawing and I like this game I had to match both of them up somehow.

We pull up another goldie oldie to give us an idea of the fun to be had with 10...Qxd6.

You know what I mean. Drawing with a pen on paper. Yes Magnus Carlsen the chess
player uses a pen and paper to write down his moves but it’s not really drawing is it?

There are more than 250 checkmates under 12 moves on RHP with this basic pattern.


It pops up in practically every opening. Two examples.

Next is a game from this year and it shows some good practical thinking by White.


Colours reversed and Black scores over 120 thanks mainly to the Englund Gambit.
(and Blanca) Quite a few players are unaware what the trap is. This year alone we have;

In case you are wondering Blanca has caught RHP 28 players with this trap.


This weeks trap has the same idea. It is from the fertile mind of Bronstein who tried it
without success in a serious OTB game. It has been set just once on RHP. Sadly it was
not sprung. (I saw it working recently at a blitz game, it’s what prompted this piece.)
So if you ever get the chance and want to become immortal then you must go for it.

Let me know when you have a victim.

By the way the Bronstein set the trap in Bronstein v Zhidkov USSR Ch. 1972

Taken a few days ago. Chess in Princes Street Gardens. (I won that one on time.) 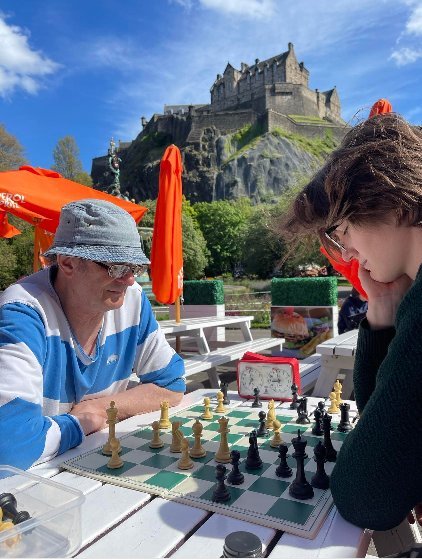 The thread accompanying this blog is Thread 193357