Hello again and do not fear I am not going to mention him and the other guy. 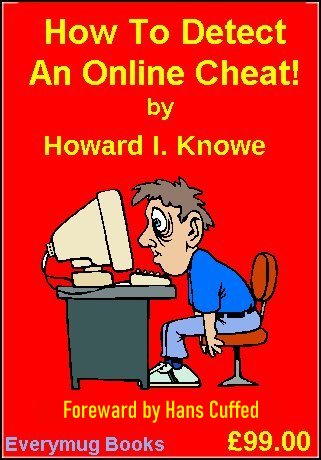 I know I promised no more about cheating but I’ve been cheated...robbed!
I found this ‘problem.’ in a very old CHESS magazine I was reading to
escape all the chess madness that is going about. The composer was Kling.

White to play and mate in two moves


The clue is in my use of the word ‘cheat.’ Forget the usual set problems rules
that the first move must not be a check (although I did not know this at the time.)
I spent a good 5 minutes on it before deciding something was wrong with it.
Nothing is wrong with it. It’s sound 1.Rd8+ checkmate next move. Cheat!

And then I stumbled over this one. Unfortunately the players names were
not given, nor where it was played all it says is it’s from a local league game.


Whit to play. What Happened Next..

If you cannot see it don’t try and find the answer using your computer, it won’t
find it either. White played 10 Nxd6 checkmate! It was not until much later that
someone realised White has taken one of their own pawns on d6 to give the mate

When you think about it being allowed to take your own men would be great!
Sadly no RHP examples to follow this one. You lose your bits in some of the
most wonderful ways possible but none of you (yet) have taken your own men.

However I can use that Knight on d6 mating pattern. First a Nd6 mate..

And now from almost the same opening, a Nd3 mate

And now an exciting new feature. Chess Stamps!
This is what one looks like.

Next week we shall look at another one.

We...or to be perfectly honest....other people, are putting together a history of the
Edinburgh Chess Club and it’s hallowed carpet which has been trod on by Euwe,
Alekhine, Karpov, Topalov and many other famous GM’s and IM’s. My job, is to
find games from our older members. A task I did not hesitate to gratefully accept.

I found this one tucked away on an apparently abandoned Belgium website.
Gordon Burt was an Edinburgh Club member. I have the full score but it’s the
critical position that is of interest to us. Gordon lost , but there was a draw there.

I’ve always enjoyed finding something like that in old games, especially one that is very rare.
What happens next is I look for a similar RHP example, possibly one with a missed mate.

White refuses a draw losses the game but missed a win. However in going for the win
their opponent could have claimed a draw. Confused? All will be explained in the notes.

I know I promised I’d spare you from ‘you-know-what’ but I was wondering what
has the coverage has been like in your neck of the woods. Here in the U.K. even the
tabloids are running it on the front page. The TV and radio are also given it air time. 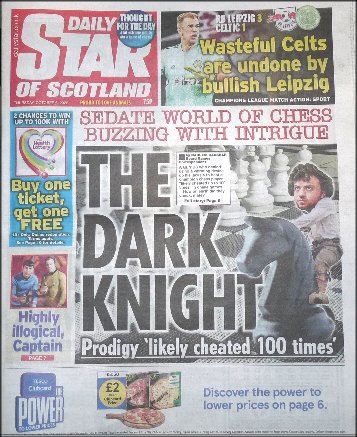 The thread accompanying this blog is Thread 194862