I’m still keeping you safe from what is happening in the real world.
So it is hear no rumours, see no rumours and speak no rumours.

And by pure luck when I was googling about I can across this; 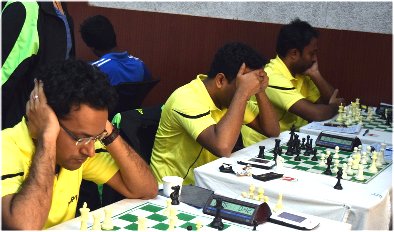 Three players, no idea of the name or the team all doing the same.

This weeks puzzle comes from;

A book full of good advice and well chosen positions. (Black to play).


Black played g6 and did go onto win. But there was a more dramatic and very
instructive way to stop the mate on g7. Get rid of the g3 Rook with a check.

Joy of joys last week as I stumbled into a charity shop and picked up for £3.50

Here, Giri spotting Sam’s body language was portraying that of a player already
lost played 45.b6 which actually give up all hope of the slim winning chances.

And yes, of course a few RHP players have made the same mistake.

But it’s not doom and gloom and Red Hot Pawn. Sometimes we get it right.

Look at this. Next week we will look at another one.

How do these things happen to the grandmasters. Like everyone else who has been
caught in an opening trick, by going though the motions without being ‘warmed up.’
‘Castle first and then do the thinking’ is a risky rule of thumb which has many victims.

The thread accompanying this blog is Thread 195152