My Edinburgh Chess Club Mug and Mouse Mat has arrived. 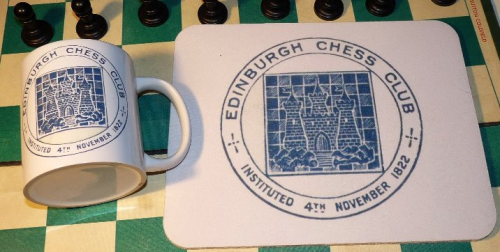 I sent off the picture to E-Bay and within a few days...Yippee!
My tea tastes sweeter and my mouse glides like a hovercraft.

Remember a couple of blogs when we covered streets named
after famous chess players. Well this has happened to me!

and a letter from the Edinburgh council proving it is named after me.

The above letter enlarged to make it more readable.

Actually I have never run a marathon, but I did once play a 26 moves simultaneous
display.(spot the link - there are 26 miles in a marathon..gedditt?). My charity work?
I spend (donate) £100’s a year in charity shops buying up naff 2nd hand chess books.

So if ever you come to Edinburgh, please walk down my street.

I have found a game by the Red Hot Pawn player HalfMarathonRunner.
(I have never run a half marathon either, my speciality was the sac(k) race!)

Do you also remember this:

I hope so, it was posted on the last blog.

Well it got me thinking. (that happens sometimes). How about an RHP game
with an h-pawn saccing itself to open the h-file and checkmate with a Knight.

I started looking for this well known theoretical position from the Yugoslav Attack.


White has just played 12.h4. There are 350+ Red Hot Pawn games with this position,
but I found only one with a Knight checkmate, but the one I did find is well worth it.

I was going through this book a few days ago.

Don’t worry if the cover of your copy differs from mine.
I tend to decorate all my books with stickers and things.

This is good because it is pointless studying all the diversifications in
an opening trap when the chances of you ever meeting it are very rare.
Actually it is not a genuine trap because if White does fall into then
Black is OK. It is better to call this variation not a ‘trap’ but a ‘pitfall.’

It all revolves around this position with White to play their 9th move.


White would like to move the d4 Knight but it exposes the e3 Bishop and 9.Nf5 Qxb2.
So White protects the e3 Bishop 9.Qd2 not worrying too much about 9...Qxb2. Read on.

Another RHP game to show how another player react to 9...Nxe4.

Remember you must do some work yourself by studying and squeezing the position dry
of all the tactics you may meet in this variation. Instead of falling into the hole White has
9.Bb3 moving the undefended piece and covering the b2 pawn. Black can still take on e4.

Now a White to play and mate in three moves puzzle. from C. S. Kipping 1928


White to play and mate in 3. Solution hidden below.

And how about something chess wise to keep you occupied during the lock down.

Draw and colour in the shapes on a stiff piece of cardboard. Cut them out and
you have a chessboard jig-saw. The solution how to put it together is below.