This is my yacht, ‘The Jerome Gambit’ (St Jerome is the patron saint of lost causes.) 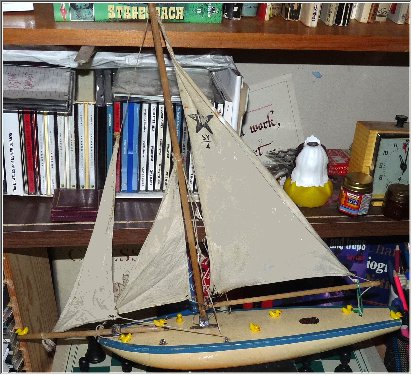 I have recently crewed it with little ducks. (see the blog about the Duck getting married.)

It sails on a regular basis on a large boating pond in Edinburgh.

It was made in 1927 the same year Alekhine beat Capablanca and for a while I did
consider calling it ‘Alekhine.’ I bought it at a car boot sale for £5.00 from an elderly
gentleman who said it was his when he was a boy. It was a right tangled up mess
when I got it but I have restored it and kept my promise to the old lad that I’d sail it.

Pauliewalnuts - Welshman RHP 2021
(in case you have not guessed it, Black took the Queen.)

I wondered what Red Hot Pawn goodies would appear with a search on
Rook takes Knight check and then a Rook giving mate all in three moves.

This tried and trusted method is what I have using since I started this blog
back in 2010. Since then I have come across and rescued from obscurity
some really amazing games. (though what amazes me and brings others to
tears is a matter of conjecture.) The second game after the above search,
jezy - Andrew Diniz makes it all worthwhile, but first we shall look at...

And next we have this pearl of creativity. I often get a message saying how much
people enjoy this blog. I have to tell you the pleasure is all mine. I love this place.

Black speculates with a Knight sac but gets carried away chasing a pretty variation
which results in Black losing their Queen. This of course is a mere flesh wound to an
Red Hot Pawn player. White trying to chop wood in a won position walks into a mate.

There are a lot RHP games that have gone this way. This one is quite pleasing.

Last blog we were looking at Anand - Mamedyarov 2022 when Anand
left the Queen sac Qxf3+ and Nh4 checkmate on the board and resigned
before Mamedyarov could play it. Here is a reminder of the position


I was looking for and found some RHP examples with the same idea.
I also did a mirror search (Black playing QxNf6+) and found this one.


It contains an instructive moment concerning gaining an important tempo

Now we see how White could have won it legitimately. He buys an important tempo.

And of course I cannot mention the Jerome Gambit without showing one.


The thread accompanying this blog is Thread 193755