I know you come here to escape reality and it’s not too often I dip your toes into
what’s going on out there in the real world but the latest Magnus Carlsen v Hans
Niemann soap opera is rolling on. When and where it will finish nobody knows

After the walk out in St. Louis Magnus ‘I don’t want my title but you
can still call World Champion’ Carlsen played one move and resigned
v Hans ‘I did cheat once or twice but now I’m really sorry ’ Niemann.

Magnus Carlsen resigned and switched off his computer.

Two camps have clearly emerged (nobody is allowed to sit on the fence) those
that bicker and bait for Magnus and those that brawl and bang a drum for Hans.
But it is all getting a tad boring and to be honest, ridiculous. so I’ll stop here.
If you want more misinformation or indeed feel an uncontrollable urge to join in
then just simply google ‘Carlen - Niemann’ and follow one of the 20,000 links. 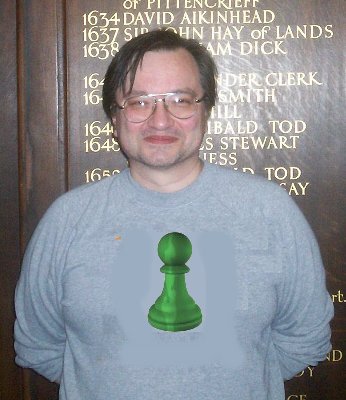 (this is not him, but I don’t have picture copyright of anyone else.)

To escape ‘the incident’ I sought comfort in thumbing through some old CHESS
magazines and in October 1973 CHESS a readers letter caught my eye. I won’t
name him but it is there is anyone wants to check. He had just returned from
spectating at the Islington Congress and was appalled to see young men dressed
as tramps and female players walking around unescorted like harlots. (his words)
We were then reminded that the deeply respected Sir George Thomas recorded
his games in English notation (old descriptive) and was always neatly turned out.

It’s obviously tongue in cheek but something nagged me about Sir George, something
I had seen on another forum. Then I remembered! Sir George passed away on the same
day that Fischer played 1.c4 in his match v Spassky. (game 6). It’s weird the odd bits
of trivia that Kibitzers dig up regarding other players. I’m just using it to link to Fischer.

That is an exact copy of what appeared last week and reader FMDavidHLevin
recalled a position from Fischer’s 60 Memorable games, possibly helped by
it’s famous note which tends to make a position stick. I knew of the note but
totally failed to make the Fischer connection. I spotted the shot. but no bell rang.
The similarity of the tactical trick in the positions is striking. A good spot by David

An excellent find by David and further proof, if indeed more were needed
that in your games Grandmaster ideas and tricks of the trade lurk all the time.
That was a fairly unique example but if there is one thing I must convince you
of is that the wonderful ‘I can’t play like that’ moves are there in your games

This weeks puzzle, which invariably leads onto RHP examples, is a standard
white to play and win which I saw floating about the internet a few days ago.
I think I’ve seen this one before as I got fairly quickly though if it had been in
an actual game the idea would have passed me by. Anybody know the composer?

White to play and win.

Reveal Hidden Content
Go back and least try it before you ask for clues.

Reveal Hidden Content
On the first move you sac a Rook

A pause to show you yet another really awful chess joke and then I’ll give the solution.

Don’t moan about these jokes I spend hours thinking them up.

I just know I have seen that before. I have an awful feeling I’ve used it somewhere.
Oh please don’t let it be here. Then I really will know I’m going round the bend.

Some RHP Queen v Two Rooks examples (two are quite good.) but we start with...


I thought I may be doomed to show games like those above and nearly pulled
the plug on the whole idea when I suddenly found the following two games.
And as if to emphasise what I was saying earlier about unplayed good moves
appearing in your games, the winning idea was missed. White lost both games.

This next one fits perfectly with the opening puzzle for this weeks theme.

Finally this next one has nothing to do with the theme it is just a nice wrap up.

A dodgy going for gold idea that could have backfired. Here the gamble paid off.
Taking risks in your games is OK as long as you willing to accept that you will lose
some games. However the pleasure of pulling of a fast one makes up for a few losses.


The thread accompanying this blog is Thread 194753