The best entry - see below where to post it, will be sent a prize!

Here is a late result. Sorry about the delay, blame global warming.

The World Rapid Chess Championship for Kids took place in November 1998
at Disneyland, Paris. It consisted of 9 rounds, each player with 25 minutes each.

Azerbaijan produced a sheet of 8 stamps to commemorate the event. 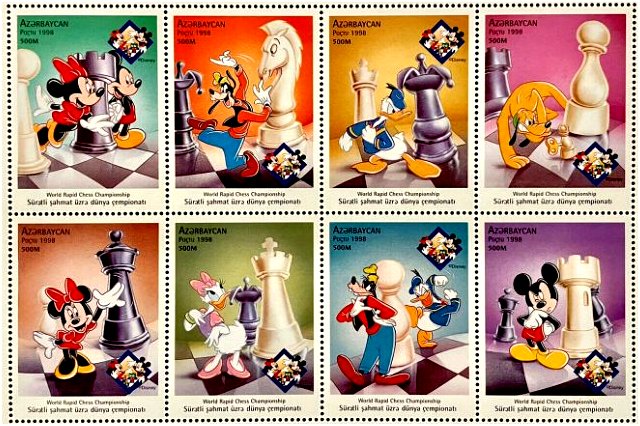 Alexandra Kosteniuk won the Girls Under 14 title with 8½ from 9 pts. Asuka
Nakamura the brother of Hikaru played in the boys under 14 scoring 6½ - 9.
This must be the perfect holiday. Play rapid chess and meet Mickey Mouse.

Quite a few medical breakthroughs have been discovered by accident.
Penicillin is one and there is also...er....em.... did I mention Penicillin?

Nobody seems to know if Alexander Galitzky (1863-1921) created his famous
mate in three which hides another problem by accident, or did he mean to do it.
I’d put money on Alexander doing it on purpose, he was an ingenious composer.

White to play and mate in three (Galitzky 1900)

Once you solved that one turn the board around and solve this mate in three.

Solution to both problems at the bottom.

The World Title match will soon upon us. I have placed £5.00 on Nepo.
(usually I sigh when I see player’s names summarised, Karpy and Kaspy
are two that have me frothing but ‘Nepo’ is understandable and forgivable.) 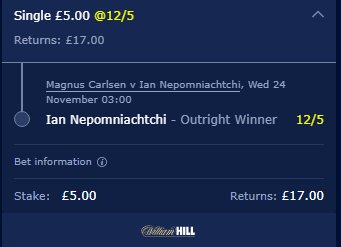 I have no doubt put the mockers on him and he is doomed. Since placing the bet the
odds have slipped even more in Carlsen’s favour. He is now 1/4 and Nepo is 11/4.

Every now and then I looked back at an old blog to see if anyone is paying attention.

In October 2010 I pointed out that four players resigned as Black in this position.

I’ll will now give the moves that lead us to the scene of the crime.

I have found this game between the Nakamura brother. Asuka was 15, Hikaru 13.

Prior to this tournament, which Hikaru won, he was asked about having to play his elder brother

“I will play him like any other player. I have played him a few times in blitz
tournaments and feel fine about it. It is really nothing new. It will be fun though.”

Hikaru won the event a whole point clear from the rest of the field. Sadly Asuka came last.


The thread accompanying this blog is Thread 190863
If you wish to enter caption competition then put your entry there.