It appears that Russia is under an international sporting ban and it looks like
Ian Nepomniachtchchi cannot play under the Russian flag during his world
championship match with Magnus Carlsen in November-December in Dubai.

Older viewers will remember the flag row from the 1978 Karpov - Korchnoi
match. Team Karpov objected to Korchnoi playing under a Swiss flag as
he was not officially a Swiss citizen. The compromise was to use no flags.

I have a better and new idea. Instead an on screen evaluation number for the
fans to follow (so they know who is winning without actually knowing why.)

A flag is linked to a computer, it goes up and down depending on the players
position. When a player wishes to resign then they press the ‘I Resign’ button.

(don’t laugh - it took me ages to create that.)

Part II of this series where we ask the eternal question how come the good
guys are the good guys? I doubt if me, being one of the bad guys, has the answer.

Now take a stroll through the murky vaults of Red Hot Pawn and find games
with the same idea that Alekhine avoided but, alas, the RHP player did not.

Look at your threats first, then your opponents. That way you won’t miss a good
move, a move that carries a bigger threat and take your time. Never rush a move.

This next one is funny (we have to laugh at out blunders else we would go insane.)

Black heads for g3 set up a mating net. The fact they can get mated going there is a
chance they are willing to take. White misses the mate, refuses the draw and is mated.

Continuing on our theme of chasing a King to where it wants to go.

Now learn from this one. A ‘Pause Before Promoting’ example from a good guy.


Black played 46....g1=R one of the very few triple Rook games
where legally under promoting to a Rook is for a valid reason.

What would have happened if he took a Queen?


Can you see how a plausible move that losses both White Rooks.

I posted that in a blog this time last year. This year I am merrily transferring the
games of James Macrae Aitken from his 40+ chess score books into PGN format. 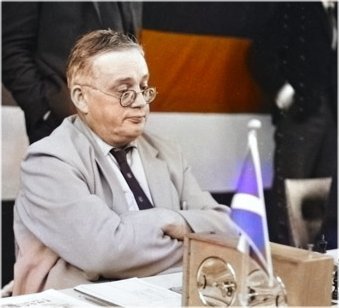 James Aitken (1908 - 1983) pic from Britbase.
I recently entered an Aitken game that reminded me of the above game.
(I never forget any of the RHP games that I use. They haunt my dreams.)

The year is 1953 and Aitken is on his way to winning his 3rd Scottish Championship.
He went on to win 10 Scottish titles. Here he did it with a clean sweep. Played 8 won 8.

(Erwin Knopfler is the father of Mark and Dave Knopfler of Dire Straights fame.)

But in this game Aitken was lucky. His opponent had at the very least a draw but....

The thread accompanying this blog is Thread 189185
I have decided to leave the comments off as I have no way other than keep coming
back here to see if any have been made. Any corrections etc just use the above link.
Share
Tweet