The Once in a Lifetime Move + Martians!

The Once in a Lifetime Move + Martians!

Rare chess books are a speciality of mine. I don’t have any.
However I bet only a few of you have this classic from 1957
written by none other than Richard Ellington (Duke’s elder brother.)

As you can guess from the cover it all about the dangers of leaving
your Queen with no escape squares. Here is an RHP example.


And another, this time it’s the White Queen that is the patsy.


Well that is the end of the book review see you next week.

The thread accompanying this blog is Thread 159888

(Show them someone winning a Queen and then losing……..Russ)

In the previous example we saw Ulf winning a Queen and forcing his way to the
White King. In this game Black wins a Queen and soon has two Queens, but losses.. .

Sit back and rejoice in the once in a lifetime chance White missed.

Emanuel Lasker said when you see a good move sit on your hands and look for a better one.

Lasker never played on the internet. If he had been around today he would have said:
“If you see a good move. Unplug your mouse and look for a better move.”

I’ll stay with this mini theme on the object of the game, which
in case you have forgotten is to Checkmate the enemy King.


What is the first thing you see? Taking the Queen or checkmating the King

White took the Black Queen with Qxc3 and went onto win but Rd8 is Checkmate.

The New York Post for Saturday the 27th August, 1988.
Why? Because it has a Chess Column in it, that is why. 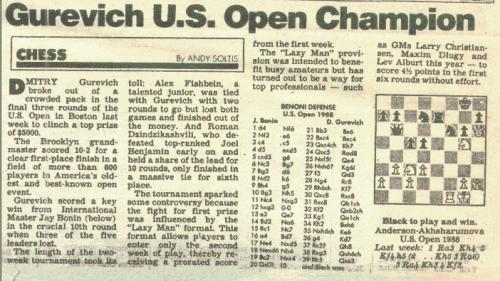 In the days before the internet this was your source for up to date news and any TN’s.

This column mentions that Dimitry Gurevich won the U.S. Open pocketing $5000.
It was run over two weeks and the main controversy was the ‘Lazy Man’s ‘ format.

This means you skip the first week joining in on the fun in the 2nd week with 4½ pts.
The plan being to encourage the working man to enter. (more than 600 had entered).
But this only encouraged the professional players to start with a 4½ pt. bye.
Those that took advantage of this included Max Dlugy, Larry Christiansen and Lev Alburt

In the given game, Bonin - Gurevich. Black had a Queen v Rook and Knight.

So I ran through the 2014 RHP Championship to see if we had any Q v R+N games.
I found this game which throws up an instructive moment. It has signposts that you look
out for in your games that tell you when to STOP! and look for tactical tricks and shots


Black will mating in a few moves. Let us see how the game went.

35. c5 Qe6 {As I said above Qa6 was winning.} 36. d5 Qe5 37. Kc2 Qh2 38. Rd3 Qh7 {Now that is a good move but Black did not follow it up correctly.} 39. Nd4 {This looks OK, the White Knight is keeping an eye on both pawns (so therefore he is overloaded.) Black played g5 and lost. When you have passed pawns on the 5th and 6th rank always look for promotion combinations. We have an overloaded Knight and a pinned Rook. So start looking for tricks.} 39... b3+ {The first step is of course to Check all Checks. The King cannot take this annoying pawn but White saw this move coming, that is why he played Nd4.} 40. Nxb3 e2 {The Knight cannot cover the Queening square, The Rook is still pinned so....} 41. Kd2 e1=Q+ {Or Qxd3+ what ever takes your fancy.} 42. Kxe1 Qxd3 {Black is looking good and should win, sadly he lost this by not stopping and recognising the dire situation of the White pieces.}


White plays a combination that wins a very expensive Black Queen.
Who would have thought that White’s back rank would prove weak in 6 moves time.

If you ever get a PM from a lad calling himself Datafly offering to sell you things. Delete it.

I failed to do this and when I read his offer on mugs.com of a pocket chess set for £5.00. look what arrived. 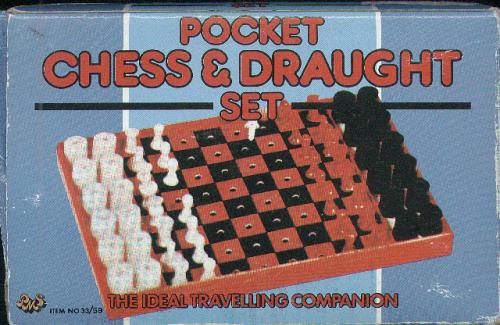 The picture of the box looks OK until you open it.

I cannot play Chess with this. I’ve been chiselled. Since when has 1.e6 been a move.

I need to do this to get a proper game:

You have been warned! Do not send this cad any money.

We started with Queens getting mugged, we shall end on the same note.

This 400 year old trap first spotted by Greco in 1610 has so many victims (100+ on here)
I have no doubt at all that in another 400 years it will still be catching the unwary.

To make it up to the more experienced players who have seen and very likely pulled
off this trap before, I offer you this piece of merriment. Once you have seen it you will forgive me.

“Wow! That is just like getting your flesh burned off by two Invading Martians.!

I’m always thinking of invading Martians, I rarely think of anything else.
When I have one of my disastrous opening ideas over the board it’s like…


The thread accompanying this blog isThread 159888