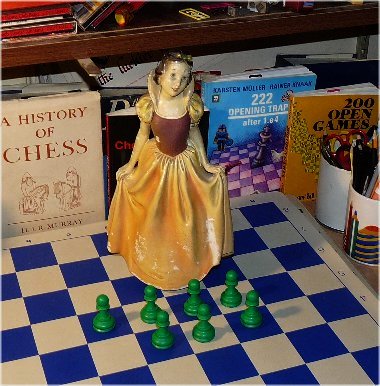 We start with a tricky problem by Lord Dunsany, White to play and mate in 4.
Look carefully, it is a legal position and there is only one reason why it can be.

This unheard melody is one of those discovered by opening investigators.

These ‘come fly with me’ variations often lay hidden in the notes of opening books and
rarely, if ever, get played OTB because they are either too fantastic or too well known.
However they do play their part in revealing some of the games concealed diamonds.

This one is a variation of the Four Knights which I first saw in Bronstein’s’ book;
‘200 Open Games.’ An RHP game was actually heading towards this wonderful
finish but a slight deviation is all it takes to hide these charming unheard melodies.

‘Removing the Guard’ is a common and self explanatory chess tactic that you will see
in the game at all levels from World Championships matches to games played in a pub.

Indeed the example I am going to use is from a friendly. I’m using it because I only
recently stumbled upon it (the chances are it will be new to everyone) and it deserves
to see the light of day after 52 years, but mainly because it fits the bill, it is instructive.

One of the most common ‘removing of the guard’ opening traps on RHP is:

As I said earlier ‘Removing the Guard’ is self explanatory. You remove
a piece guarding another piece and the defended piece falls next move.

Deflecting the Guard, falls into the same category. the defending piece is chased away
leaving what ever it was defending, a piece, a pawn or even a pivotal square hanging.

Due to the law that states a King must get out check, a King is the worst offender at
being deflected. When on defending duty a King has to react to any check and the
games history is littered with chessboard casualties after a King has been deflected.

Losing Rooks on RHP by deflecting a King in King and Rooks endings are unfortunately
a dime a dozen. Do not worry I am not going to give a dozens examples. Two will do.

The Lord Dunsany Mate in Four.

The only way for that position to have legally emerged (the Black King and Queen have
changed places) is for the board to be positioned the wrong way around. Black is playing
up the board. Connoisseur problem solvers will have got it right away when they saw
the name of Lord Dunsany (1878-1957) who specialised in these type of joke problems.


The thread accompanying this blog is Thread 189457