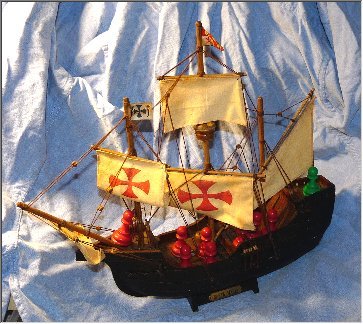 Jump aboard and throw the compass out a porthole, we go where the tide takes us.
Look at this piece of treasure buried deep within the vaults of the RHP database.


Which Bishop is captured by a pawn. (the answer is both of them.)

...figures again in this next game.

and of course from the Black side of the dream opening position.

Nordpolen used that opening a few times, he actually won two with it but as
both games went over 40 moves it never had much to do with the 1.f3 opening.

Here is another Nordpolen loss (sorry mate but you do play some instructive chess)
I’m using this to highlight something I mentioned a few weeks back about taking Rooks.

This next piece of treasure was given to us by Andre Cheron in 1964.

And this next one was scratched on the wall in the crews quarters.

White to play and mate in 31 moves.

The crew of course are messing about. Here is what it should look like.


White playing up the board mates in 15 moves. (composer unknown to me)

Now, as you no doubt guessed, a couple of RHP games where this Qh5+ idea worked.

To add to the jollity member Venda sent me a game that ends with a suicidal King march.