The most famous game of chess must be Morphy at the Opera, Paris 1858.
Not the best game ever played, the most famous, the difference is important.

In the last few months another game has become famous, or depending on
your point of view, infamous and many points of view have been expressed
about the Carlsen - Niemann game played at St. Louis on the 4th September.
Everyone ranging from Karpov to the non-players you happen to bump into
in the street have speculated, theorised and given a guess at what happened.

Did Hans cheat during that game or did Carlsen have a sore losers sulk?

Although I am very famous in the chess world, (me and Karpov went to different
schools together) I have never met Hans nor am I privy to Carlsen’s frame of mind.
However, I’m an enterprising kind of chap and to get answers I’ve even attempted to
hack into their email accounts by guessing their passwords and I can now reveal that
neither of them have ‘Morphy 1858’ as their passwords which I thought was a certainty.

Having failed to hack their email accounts. I wondered if this book would have the answer.

What a stupid cover, no wonder I got it wrong the first time.

I looked at the game soon after it was played and now I am going to note it up.
(Some others have come to the own conclusion by looking at the result, looking
at the ratings, looked at Carlsen’s reaction and simply decided that Hans cheated.)

Those who have looked at the game seem to be in general agreement that
the game is sound and Carlsen played poorly which takes something away
from Niemann because this is a fine game and Niemann played good chess.

There are two key positions where others using top notch computers have spotted
that the top choice was not played by Hans. They then plod on showing analysis
of the unplayed computer move because the computer is doing their work for them.

What is not mentioned is why Hans played what he played. The reason is simple.
The moves were played by Hans in critical positions and were are not top choice
computer moves because they were human moves. Hans set a couple of good traps.
A couple of practical OTB moves as you would expect a good chess player to play.

Position one, Black to play


Surely here 34...Rf5+ to hold f7 (it’s what I would have played and it is apparently the
top choice of computers ) but when you look deeper at what was played 34...Rc1+ and
35...Rd2 inviting 36. Rxf7+ you can see it is a trap because after 36...Kg6 the Bishop is
under attack and although White can wriggle about and not lose a piece Black’s Rook
and Knight by chasing the Bishop soon take up alarming positions near the White King.

That checkmate mate I mentioned, it is a Rook Knight and pawn mating pattern.

That Rook, Knight and pawn mating pattern is fairly common. There are 90+ examples
of it on RHP and that is not counting the times players have seen it coming and resigned.

In this next RHP game White misses the first chance to play for the mate.

I bet you never knew that the first chess stamp was issued in 1947 by Bulgaria.
Neither did I until I read an article in CHESS monthly July 1996 by Mike Pennell. 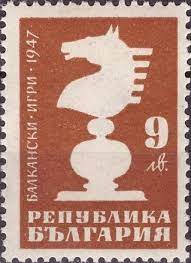 This is the cover of that Chess magazine.

My 400th blog maybe I should have done a stamp.

The thread accompanying this blog is Thread 195398