Christmas Chess Quiz (and other stuff)

Christmas Chess Quiz (and other stuff)

Hi All, a Merry Christmas and without any further ado:

Fill in the missing words from these book covers. 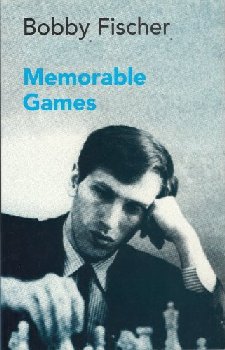 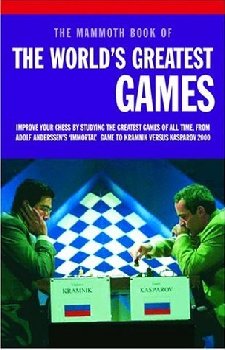 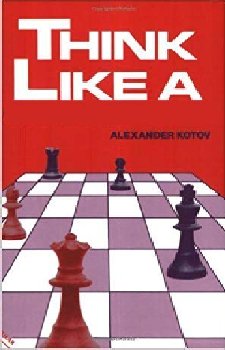 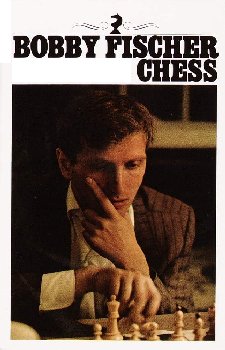 *** The Christmas Crossword ***
(All the answers are chess players )

I saw this puzzle on another site. (the puzzle here being who would dare reprint it.....me).

White to play and mate in two.

Too easy for a two mover. The first move is a check and it
is probably he first ever mating pattern we associated with.

I messed around with it a bit and came up with this Mate in Two.
(There are four solutions and none of the first moves is a check.)


Next up is this picture of Magnus Carlsen and Levon Aronian. 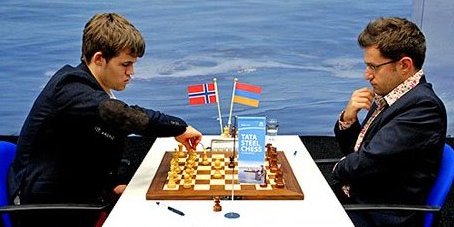 I know who the players are because the original picture has this...

...someone has put the names next to the board. (That’s handy, a good idea.)

I do not know where they are playing. The sea is too blue and clean looking
for the English Channel so it’s not Brighton and at the time this game was
played the Newcastle to Zeebrugge ferry is normally passing by so it’s not
Scarborough. No dolphins splashing about so I do not think it was played
in the Mediterranean. I don’t like dolphins, their bottle shaped noses......

OK. it is Carlsen and Aronian but who is that standing in the background.

Reveal Hidden Content
Anish Giri, you cannot see him because he is so skinny and standing sideways...ha ha ha

I scorn a pawn.
I fight with a Knight
I took a Rook
I seen the Queen
had a thing for my King
but my Bishop...er...em....

OK a proper puzzle. A Helpmate in Four.

Black moves first both colours conspire to let White give mate on the 4th move. 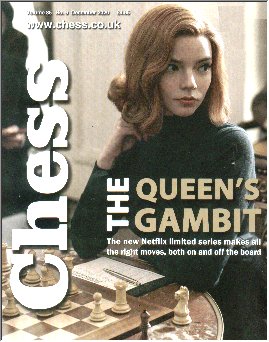 Seems the whole planet, and not just the chess fraternity, have been raving on
and on about this T.V. Series. I’ve not watched it yet, but looking forward to it. 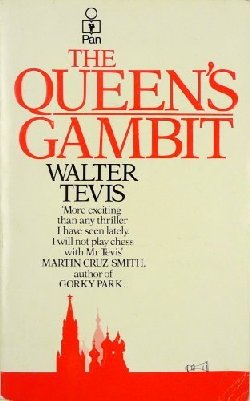 The book that inspired the TV series I did read, no I’ll correct that, I only
partly read. I was not getting along with it so tossed it into a 2nd hand shop.

A mistake was noted in the book, not that that bothered me, chess mistakes in works
of fiction I’ve come to expect especially if the author is a non player and is just using
chess as a backdrop to some soppy mushy love story. Mills and Boon on a chessboard.

But in this case the author was a U.S. rated player, and apparently had the chess coach
Bruce Pandolfini to go over the text looking at the chess bits to make sure he got it right.
(also it’s far from a sloppy mushy Mills and Boon love story - I just did not like it.)

I know only too well that the gremlins will sneak in but this one is rather funny.

The opening moves are in the book (and current reprint to catch the TV audience.)

Of course it could be a stab at getting yourself in MCO. ‘The Tevis Gambit.’
And yes it has been played on here...four times! White has won two of them!

Here is one of the White wins. I’ve tweaked it a bit to show how you guys could
squeeze more from the good positions you get. Take your time think: Get The King!
A bit of artist license here but I’ve seen enough of your games. This is all plausible.


Staying with the same book and game, Walter Tevis got this bit right.
The game he writes about is Mieses - Reshevsky, Margate 1935.

(White to play: The text underneath is from the book)


“What does White do here?” he asked, looking around him.

One of the men watching spoke up. “Queen takes pawn?”

The man in the cap shook his head, smiling.
“Rook to king eight check. And the queen falls.”

So if ever a man in a cap asks you: “What does White do here?”
Do not take a pawn else you will find yourself a Queen down.

I’m still turning the James Aitken games into PGN format. At the time of
writing this I am on Book 12 and this time next year I’ll still be doing it.

But that’s not a complaint I am getting loads of blog copy - look at this.

In a qualifying tournament to play in the British Championship Aitken
played one of his pet defences to 1.d4 The Cambridge Spring Defence.

I doubt very much he expected to catch anyone with the famous trap
attached to this opening (which has been known since 1904) but he did.

Some of you will, in fact most of you, will not recognise the notation.
It is a secret chess notation used in WWII. Alan Turing and his hut 8
chess playing buddies had to build the worlds first computer to crack it.

Yes! You can read all about in ‘Codes and Ciphers’ by Dot Morse.

There are actually two traps coming up, the first one has 150+ RHP victims.


I have 150+ OTB players falling for this and ‘only’ 50+ Red Hot Pawn players!
The first trap has 150+ victims but five moves later the 2nd trap only catches 50
The main reason for this is because the majority of players here do not follow theory.
8 moves is too deep for a book trap as most of you go your own way in the opening.

Here ‘Blanca’ has caught the most with 15 victims, one player has been trapped
twice with it but as it is Christmas and I’m feeling merry we shall not name them.

A chess playing friend of mine, Alan Mountford snared the same player over the board
twice with it with a two year gap in between each game. ‘Do we learn from our losses?’