Russia decided that FIDE needed a Chess World Champion and so invited
three Soviet players, Botvinnik, Keres and Smyslov to play for the vacant
title. FIDE meekly pointed out that it would look better if chess players from
other nations were allowed to take part. In the spirit of fair play Russia agreed.

So they allowed in an ageing Euwe, the ex child prodigy Reshevsky and
Rueben Fine who beat Botvinnik the last time they played. So although
Rueben Fine was sent an invite it never arrived so he never turned up

The mystery of what happened to the letter was solved 25 years later.
The postman had delivered it to his neighbour by mistake. So Mr Albert
Finkle turned up to play but was not allowed. He might beat Botvinnik. 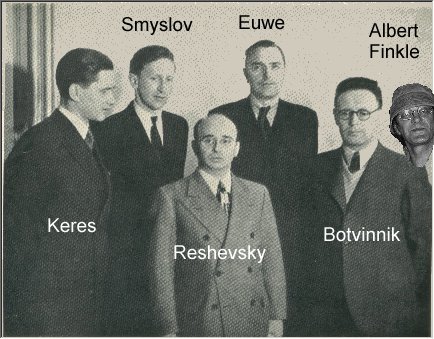 (pic from ‘The World Chess Championship 1948’ by Harry Golombek.)

They played with 5 players with one player getting a bye every round and at
the end of the event Botvinnik was the winner and was the World Champion.
Years later it was noticed that only Botvinnik had been given an extra ½ point
for every bye, some just blamed Keres for not mentioning this to the controllers.

Time for some Red Hot Pawn stuff. We are covering 1948 so we look at move 48.
Try and guess how many stalemates were there on RHP in 2018 in exactly 48 moves?

Two, Four, Five....Ten? There were a total of twenty nine. Here are four of them.


White played 48. Kf3 to play Rf6 next move. But Black does not have a next move.

Onto 1951 the year of the birth of Anatoly Karpov and me. Karpov went
onto to become the Champion of the World and me? I’ve up ended here.

I cannot understand it. We are of the same age, both of us know the rules of
the game, and yet he gets to become the World Champion. It’s just not fair.
You know, sometimes wish I had been born a Russian instead of handsome.

You are indeed correct Duck. My very first tournament game was in 1972.

The trap for this game came from a poem in the ‘Chess Companion’ by Chernev.
That it how sparse my chess book collection was back then. That book, this book.

And Fischer’s 60 Games (90% of which went over my head). No wonder I
was reduced to reading poetry. I probably thought I bet I am one of the very
few who have played out the moves on a board, Maybe nobody else knows it.


Of course The Duck means 1972 and the Fischer - Spassky World Championship match.
The trouble is what can I write about it that has not already been said 6,356 times before.

To give those unlucky enough not to have been alive in 1972 here is an idea of the impact
this match was having. The November 1972 CHESS was reporting their stocks were low. 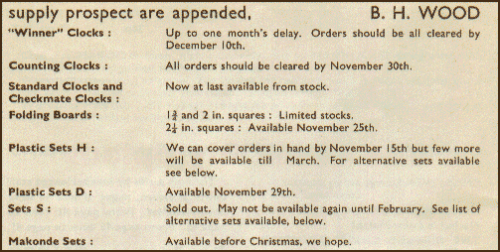 
Spassky trapped the Bishop with 30.g3 and won.

I could not find a good RHP game that featured 29...Bxh2 but not to worry
I found few games which has Black playing 28...Bxh2. (it’s close enough).

Another 28...Bxh2 pawn grab, this time to deliberately played to sac the Bishop.

Last year we had a Bxh2 and g3 and it’s best if I say no more. Just enjoy the game.

dontdaremovethatking - RenÃ© Liebenberg RHP 2018
(there is actually a hint of what is to come in White’s chosen nickname.)


Fischer eventually won the 1972 match and in 1975 FIDE could not meet all of Fischer’s
demands so they took his title away and gave it to Karpov thus launching one of the
greatest speculation debates in chess history. Who would have won in Fischer v Karpov.

What Happened? Apparently Rybka did not like getting it’s picture taken so stormed off.

Next week more history. I’ll bring it right up to date.