Me promoting my new chess book at the Edinburgh Book Festival. 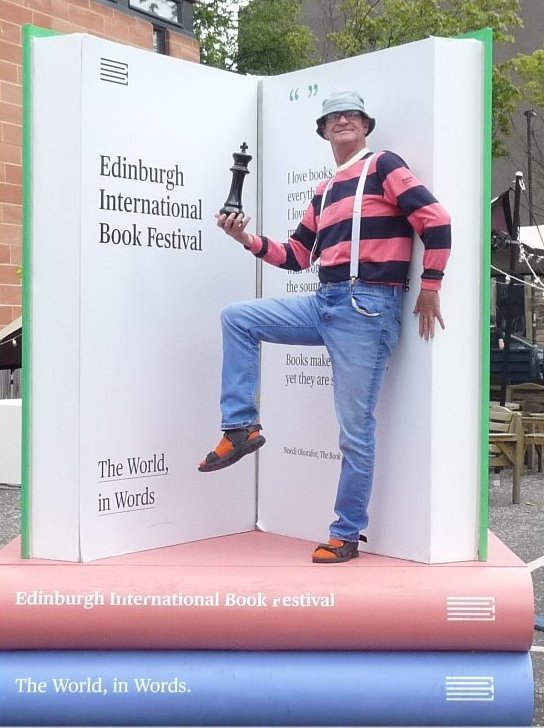 In 1989 I found chicken wandering about the streets, apparently it had
just crossed the road. I took it home and to my surprise it laid an egg.

I now have over 100 chickens who I play at chess whilst listening to Rock ‘n’ Roll.
I use the feathers to make a chicken feather kilts which I sell to the tourists and.....

The Ruy Lopez has been creating hurricane havoc on the Kingside.

Slight summer breezes from the Grunfeld and the Kings Indian.

A theoretical storm is brewing in the Queens Gambit due to a force nine...

I may have mentioned in previous blogs that I have undertaken to transform all
of the James Macrae Aitken score books into digitalised format for posterity.

Here is just a selection of the books that I have been working on since last year. 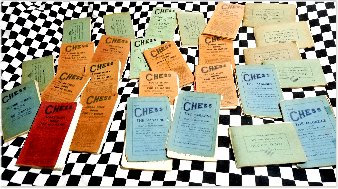 I have entered well over 1,000 games and as a game length averages out at approx
30 moves (which you multiply by two for both white and black) I have entered over
60.000 moves and I’m starting to see Aitken’s descriptive notation games in my sleep.

The good news is I am down to the last three books and although it appears I’m having
a wee grumble I am in fact enjoying it.... did someone mention James Macrae Aitken?

Since 1957 players have been setting Aitken a ‘please take my e-pawn trap.’


Most players of the white pieces have played 8.Nf3 because 8...Nxe4 9.Qa5+ wins a piece.
Aitken never took e-pawn. I bet myself a chocolate sandwich that someone here on RHP has.

I have been reading on a few websites about computer generated chess problems.
I’m not sure of the technical details as I have been more interested in the positions
that are being created than how the computers go about setting up a chess problem.

Some human constructed mates in three are very difficult to solve, and yet even
the weakest computers can solve them within seconds. Given time I am sure in
the future computers will be constructing chess problems that only they can solve!

Here are a couple. I’ll give the solutions right after both diagrams with some RHP
games using a similar idea. In both cases it is White to play and mate in three moves.

Not too hard but as we shall see they contain human pitfalls.

In the first one White avoided a Queen promotion as that was stalemate.
Over the years I have shown numerous RHP games where a player has not
‘Paused Before Promoting,’ taken a Queen and stalemated their opponent.

Here is another rather humorous example.

Next, instead of showing you an RHP disaster, and believe me I have 100’s to choose
from, how about an RHP game from the 2nd problem where the player does not falter.

And to finish, plucked at random, an RHP game where the win was messed up.

The thread accompanying this blog is Thread 190438
I have decided to leave the comments off as I have no way other than keep coming
back here to see if any have been made. Any corrections etc just use the above link.
Share
Tweet