As usual we start with the results from last weeks quiz. The answers are:

1) Karpov and a Swedish submarine.
2) Rice pudding and the Ruy Lopez
3) Lasker and a horse called Brenda.

The first name out of the hat with three correct answers was @GummyMummy..

The Spot the Difference competition had a slight flaw (see below)
The pictures were exactly the same so there was no difference! 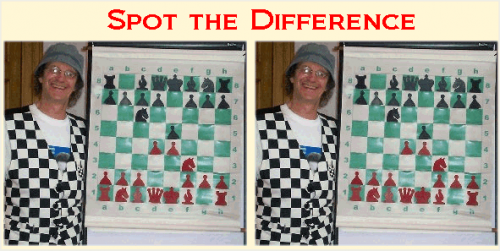 Sorry about that but it is quite hard to get two pictures that look the same but are different.

How I find the games I use on Red Hot Pawn with the help of ChessBase. (part 2).

*** The Source Idea or Inspiration ***
Not so long ago I was looking for a Nunn game in some old British Chess Magazines.
I happened across a January 1998 BCM with a picture of Jonathan Parker on the cover.

Jonathan was old league team mate of mine. However It was not the magazine I was
looking for but I noticed back in 1998 I had written on the cover ‘First Page Blunder:’

I do that with all magazines if there is something inside I can use at a later date.
That later date is now. On the inside cover is a diagram with a double-blunder.

So using that double-blunder as my inspiration game I then fire up the RHP DataBase
Asking it to find me games where Black had a Bishop and Pawns v Rook and Pawns.

I also instructed the program to see if any Bishop has given mate in that set up.

The ‘??’ there mean Bishop from anywhere to anywhere giving checkmate.
ChessBase found 22 Bishop mates v a Rook. I then pick out the best ones
which often means the funniest. (any instructive value is purely coincidental.)

I have a copy of all the 346 blogs I have done, I then run a players name though
a word search looking at all previous blogs to make sure I have not used it before.
(sometimes I let a ‘doubler; sneak through if I think it warrants another airing.)

So now sit back and enjoy the fun which took me about two hours to put together.
I mention this because imagine how long it would take me without a computer.


This next one is actually good play by the Bishop player.
lawtonbluff - mikeyp2008 RHP 2012.


Of course I had a quick peek to see if I could find a Knight v Rook (and pawns) Checkmate.


The thread accompanying this blog is Thread 188444
I have decided to leave the comments off as I have no way other than keep coming
back here to see if any have been made. Any corrections etc just use the above link.
Share
Tweet