Hello, Merry Christmas etc...etc... some of the answers are right below the questions`.
Those that require a more detailed answer are in the 'Answers' section at the bottom.

(1) One condition in Santa’s contract was not only to deliver toys to every corner
of the globe but to also take out ‘The Grinch.’ This is known as Santa’s clause.

This mate in four moves credited to W. A. Shrinkman does it perfectly.


White to play and mate in four moves. (nobble the Grinch which is on h1)

(2) What is the difference between these two positions? 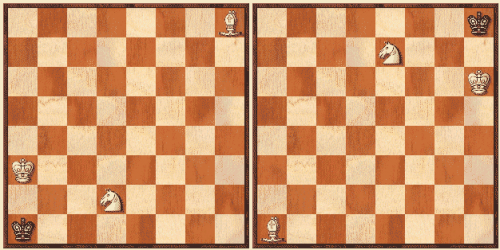 Reveal Hidden Content
The position on the right is illegal. on the left White has just played h7-h8=Bishop mate.


(3) A World Championship general knowledge question. Kramnik v Topalov in 2006
and Carlsen v Caruana in 2018. All four had one single thing in common. What was it?

Reveal Hidden Content
At the time of the matches all four players were unmarried. The clue was the word single.


Now one to slip into the conversation during your Christmas dinner.
(and I’m not ashamed to admit I got this one from a Christmas Cracker.)

Two chess players had played each other more than 20 times OTB.
Yet each player had never seen each other. (OTB = Over the Board).


(4) The famous eight queens puzzle (with a slight difference)

(5) This mate in two composed by Fabel is perfect Christmas fodder.


White to play and checkmate in two moves. White is playing
up the board. All those Black pawns are about to promote.


(a) Play a move that checkmates Black in one move.

(b) Play a move forcing Black to checkmate White.

(c) Play a move that stalemates Black in one move.

(d) Play a move that forces Black to stalemate White.


White to play and mate in two moves.

You should see that moving both Rooks will give White a discovered checkmate.
But which one? And where too? Only one Rook move will mate on the next move.


White to play and win. (solution at the bottom)

(9) I use to hate getting a jig-saw for Christmas. So here is yours!

It is achile444 - MARUS RHP 2019 can you put it together.
Clue: Black has just made a move and stalemated White.

(10) Chess Players Picture Charades (groan) Who are they?


(11) Everyone remembers Fischer beating Taimanov and Larsen 6-0 then
Petrosian 6½ - 2½ to get to the 1972 Final v Spassky but there were four
other players in the candidates who were they and who knocked them out.
If you can remember the scores, then next year you do the Christmas quiz.

(12) This is how you place 20 Knights (10 White / 10 Black) on
a chessboard so that only one Knight is attacking another Knight.

.
You now have to place 32 Knight (16 White / 16 Black) on a
chessboard so that only one Knight is attacking another Knight.

(when I thought about this I forgot Ulhmann. But recalled the Korchnoi - Geller score.
Geller did in fact lose all three of his candidate matches by the same score, 5½ - 2½ .
Geller did win a match v Smyslov in 1965 by the score....yes you guessed it. 5½ - 2½ )

The thread accompanying this blog is Thread 183336